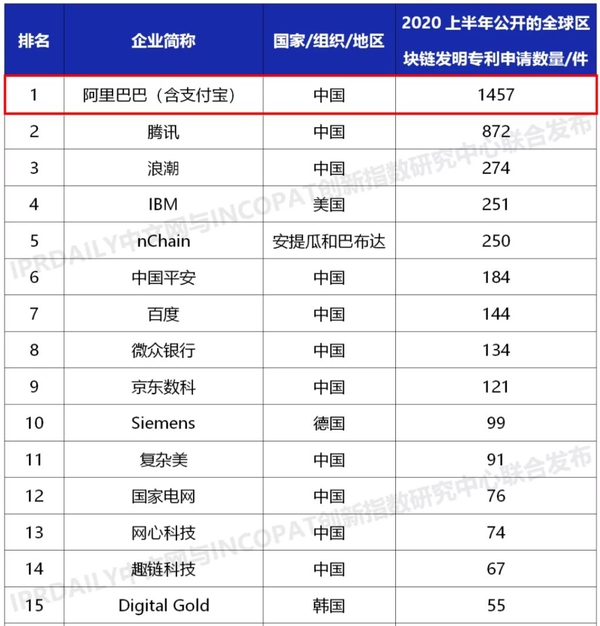 On July 29, IPRdaily, a global third-party intellectual property organization, and the incoPat Innovation Index Research Center released the Global Enterprise Blockchain Invention Patent Ranking for the First Half of 2020.

The list shows that Alibaba (including Alipay) continues to rank first with 1457 patents, and the total number exceeds the sum of the second, third and fourth places. For the fourth consecutive year, it has ranked first in the world for blockchain patent applications.

It is understood that Alibaba's blockchain patents mainly come from the Ant Group's blockchain team, which was renamed AntChain a week ago.

In addition to the Ant Group, the report found that Tencent ranked second with 872 patents through statistical analysis of the number of global blockchain technology invention patent applications published from January 1 to June 30, 2020.

It is worth noting that the number of blockchain patent applications for AntChain in the first half of this year is close to that of last year. IPRdaily data shows that in 2019, Alibaba (Alipay) ranked first with 1,505 patents.

Previous public data showed that in addition to the number of applications, AntChain also leads the world in patent licensing.

According to the relevant report of the Patent Protection Association Of China, as of May 14, Alipay has obtained 212 blockchain patents worldwide, 126 of which were obtained in countries and regions outside China. In other words, the proportion of overseas licenses exceeds 59%.

In addition, according to the IPRdaily report, nearly half of the top 100 companies on the list are Chinese companies, accounting for 46%, followed by the United States accounting for 25%.

In fact, blockchain technology has reached into many fields such as financial technology, supply chain management, and digital asset trading.

Many large technology companies are starting related projects and increasing their support and promotion of blockchain technology.

In China, as of July 2020, Hebei, Guizhou, Hunan, Beijing, Guangzhou and other places have issued blockchain development action plans to promote the construction of blockchain platforms and the "chain" of enterprises.