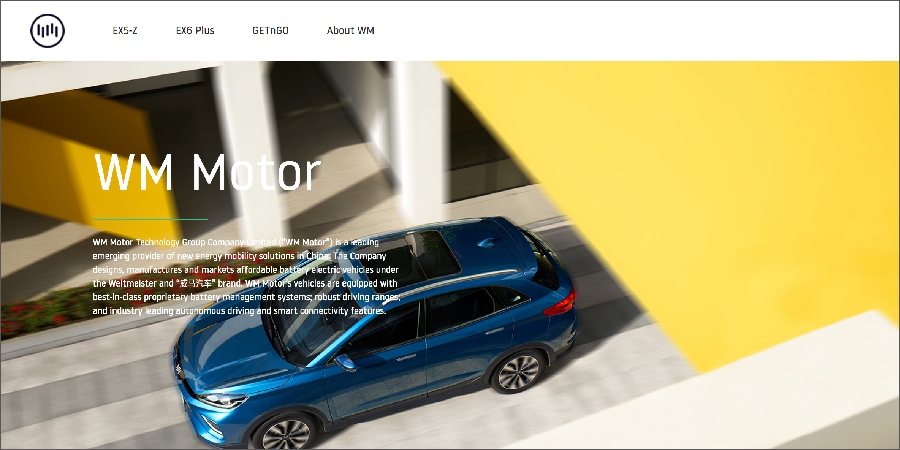 According to a report by Caijing, a source close to WM Motor revealed that its leading investors have confirmed the D round of financing. After its completion, WM Motor will strive be listed first new energy carmaker on the Sci-tech Innovation Board (STAR Market).

Regarding the listing plan as reported, WM Motor said in response that it would not comment.

Prior to the listing of WM Motor, NIO, Lixiang, and XPEV have been listed successively, forming the "Three Kingdoms" of Chinese new energy carmakers in the US stock market.

Lagging behind, WM Motor is making every effort to become the “first stock of new energy on the Science and Technology Innovation Board”. But there is not much time left for WM Motor.

Currently, another carmaker Hozon Auto has launched a Series C financing and will seek to be listed on the Science and Technology Innovation Board in 2021. Who will become the “first stock of new energy on the Sci-tech Innovation Board” is of far-reaching significance to all the players in car manufacturing.

Since its establishment in 2015, WM Motor has completed multiple rounds of financing.

Its investors include Internet giants such as Baidu and Tencent, strategic investors such as Far East Horizon, industrial investment funds such as Chengwei Capital, and local investment institutions such as China Structual Reform Fund.

However, many large domestic funds and local governments are interested in WM Motor. After the completion of the D round of financing, WM Motor is valued at more than 30 billion yuan, and the estimated IPO value is more than 60 billion yuan. The process of its financing also affects the process of WM Motor's listing.

In terms of sales volume, WM Motor, which has been adopting “accessible price points” for its cars, mainly has two main models, EX5 and EX6, and is targeted for a mid-range electric vehicle market of 150,000 to 250,000 yuan for each car.

The development of WM Motor has been relatively stable. At the beginning of its establishment, WM Motor established a "three-step strategy": the first step is to be a popularizer of smart electric vehicles; the second step is to grow into a data-driven smart hardware company; the third step is to be a smart travel service provider.

However, there are also hidden risks about the development of WM Motor. After 2020, similar to many new car-making forces, WM Motor also experienced a wave of executive resignations.

Judging from the current market performance, Xiaopeng P7 and NIO ES6, as two new models of car-making players, have good sales and popularity, and both have the potential to become the most popular models.

In contrast, WM Motor EX6 did not achieve the expected results after it went on the market. At present, WM Motor still rely on one model.

Public information shows that on May 10, WM Motor released the first concept car Maven. The NEDC range of this model can reach 800 kilometers. It is expected to have L4 autonomous driving and 5G interconnected communication technology. It will be mass-produced in 2021.

This new model may become the trump card of WM Motor.